The previous article  on the Doppler nature of the five-day period logically led to the suggestion on the structure of the daily period, also presumably consisting of five steps (periods similar to the “days” inside the day).

The result is a scheme where the following rules are observed:

– During the day, the root energy of each meridian experiences five rises and five recessions (ebb and flow), returning to its original state.

– The maximum flow of energy in the meridian falls on the standard period of its activity and this is due to the five-day cycle, but as it turns out from the scheme, the meridian is active at another specific time.

– For the existing level of the temporal hierarchy at each time point in the system (organism), there is only one oscillatory process. The vibrations of this pulse, following from one meridian to another, undergo a transformation towards a lower frequency band, as can be seen from the dynamics of the color change of active periods. At the moment of the period of violet vibrations (it is Qi of the Fire-Minister element), there is an abrupt increase in frequency to the level of blue vibrations (Qi of Cold Element) and then the frequencies start to decrease monotonously again.

– the structure of the meridians is coordinated with each other in such a way that it forms 3 sets, where the meridians are grouped according to the “cross” scheme, in which all four meridians are synchronous in the structure of their internal circulations (circulation has always the order like in daily cycle):
The first set is GB-LI-PC-KI (Gall bladder, Large intestine, Pericardium, Kidneys).
The second set – LR-ST-TE-HT (Liver, Stomach, Triple Energizer, Heart),
The third set is LU-SP-BL-SI (Lungs, Spleen, Urinary bladder, Small intestine).

The structure of the scheme has a close connection with the structure formed by the Doppler effect – at 00 o’clock (at this time, the observer on the Earth’s surface will experience the highest rate of “escape” from the Aether wind flow and the oscillation frequency here will be the lowest in the structure of space). And vice versa – at 12 o’clock in astronomical time, the movement of an observer on the surface of the Earth will meet the ether wind and it will increase the frequency of oscillations of the medium.

In each of the five segments, there is also a five-fold structure. Those. the calendar has a fractal factor equal to five. 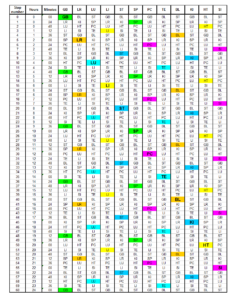 A separate issue is the definition of the beginning of the cycle. Here we turn to what traditional sources say about the beginning of the Sexagenary Cycle since the structure of 60 periods leads to the idea of ​​the unity of these periods. And traditional sources say that the beginning of the Sexagenary Cycle falls on the period of the Mouse (Rat), which in the annual cycle corresponds to the period of activity of the Bladder meridian and, on the other hand, the Bladder meridian is the first (the second is Kidney), which is formed inside the Fire Minister Element. And the Fire-Minister in our hypothesis is a reflection, a manifestation of an external influence that predetermines the internal structure. On the other hand, if we look at the period of the Urinary bladder (BL) inside the structure of the Gall bladder (GB) meridian, for which we must go back 4 steps, we will see that the period of the Urinary bladder began at 22.12 after the period of the Fire Minister (purple vibration) on the Small intestine (SI) meridian. But the meridian of the Small intestine in our Doppler hypothesis indicates the moment when the main aethereal stream of cosmic compression arrives of a day.