Why do the Chinese say that the five days is a measure of time? But no one has said – why exactly – Five? If you have met a valid argument – please inform me. Very interesting.

For his part, exploring the Doppler model of the origin of acupuncture meridians (https://pulse-academy.com/download/the-elements-of-life/), it was found that if any vibration gets excited as a pair of the Yin and Yang components, then this vibration can be repeated at the same daily arrangement only in FIVE days.

Take for example the green vibration of the Gall bladder (GB) and Spleen (SP). If excitation has come by green vibration (and this is the element of the Earth in our Doppler’s theory), then, conditionally speaking, at 00 hours of the daily time this vibration prevails over the surface, at 04 hours – exactly on the surface, and at 10 hours – below the surface.

Continuing the motion of the sinusoid along the time axis, we will get the sequence of activation of the meridians by vibrations (in brackets indicate what energy came into the meridian):

* Here are meridians abbreviations and color matching according to the vibration Doppler model:

As it can be seen from the excitation sequence, the meridians are grouped in color pairs in the direction of a successive change of colors from green through yellow, red, purple, blue, and turquoise to green again.

Such a change of colors corresponds to the movement in the direction of expansion of space, which is the opposite of movement in the external environment, which is experiencing constant compression (expressed by the force of the Aether gravity). This state corresponds to the principle of Le Chatelier Brown – to any action with respect to a sustainable system – the body responds with the reaction of the opposite action, which, strictly speaking, is a variation of the implementation of Newton’s third law on the forces of action and reaction.

In the above sequence of activation of the meridians, the alternation of Yin and Yang vibrations causes the resonance of vibrations of green, red and blue colors where there is a coincidence of structure and function, and the vibrations of yellow, blue and purple colors are suppressed – all exactly with the laws of physics, where the vibrations grouped according to their peculiarities either in black or white:
White – purple, turquoise, yellow,
Black – red, green, blue.

Well, the last note to the discovery is the fact that the activity of Yin and Yang of green vibrations over the five-day period is repeated SIX times during the period of FIVE cycles from 12 meridians, which suggests that the structure described by the Chinese in the theories of Wu Yun Liu Qi and Jia-Zi is found. 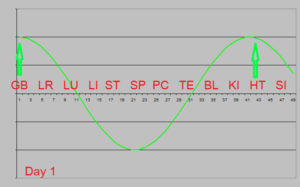 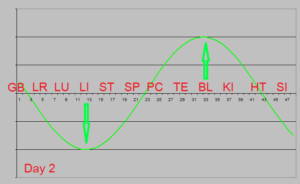 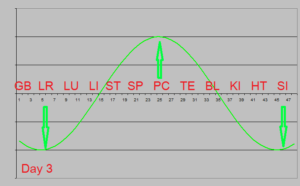 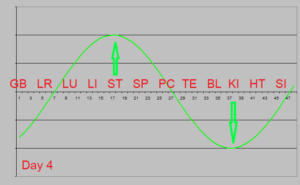 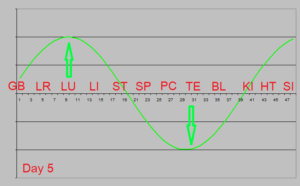