In the first two parts, we studied the role of potassium in the development of the disease.

In the case of Emixustat for treating macular degeneration, the target of exposure is also lipofuscin.

Lipofuscin is the name given to fine yellow-brown pigment granules. It is considered to be a sign of aging or “wear-and-tear” pigments, found in the liver, kidney, heart muscle, retina, adrenals, nerve cells, and ganglion cells. Lipofuscin is contained mainly in the form of granules surrounded by a lysosomal membrane, concentrated around the nucleus. By its concentration, they even determine the age of arthropods and other living creatures that do not have a skeleton.

Its appearance in cells is associated with the functional inability of the body to neutralize “cellular debris”. And so that this garbage does not interfere with the normal activity of the cell, it is packaged in an insoluble lipid capsule. The only trouble is that the intracellular garbage landfill can take a limited amount of the substance and with large volumes, the cell simply cannot work normally, as it happens in an aging organism.

The composition of lipofuscin includes fats (20-50%), proteins (30-60%), a significant amount of carbon, nitrogen, phosphorus, sulfur, magnesium and aluminum. Fats are mostly represented by phospholipids (cephalin, lecithin, sphingomyelin), as well as cholesterol, triglycerides and products of peroxidation and polymerization of fatty acids. The composition of lipofuscin granules can include all known amino acids, the quantitative ratio of which depends on the organ where lipofuscin is placed. But the most abundant amino acids in lipofuscin granules are glycine, valine, alanine, and proline.

Now let’s dwell on the 4 main amino acids of lipofuscin and consider them through the prism of the vibrational model of the Chinese Book of Changes, the theory of which is set out in the work “DNA codes of the I-Ching”

It was demonstrated in the above-mentioned paper that the bases in the triplets of genetic code correspond to the twelve main meridians of Chinese traditional medicine. On the other hand on the basis of the similarity of their vibration spectra, each of the meridians has a connection with certain macroelements – potassium, magnesium, calcium, sodium, hydrogen, or hydroxyl ions. The relationship table is shown below. 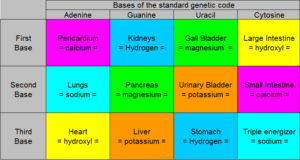 In the context of the presented table, let’s look at the structure of the 4 main amino acids of lipofuscin from the point of view of the proportions of the main minerals.

Considering that the 3rd base of DNA structure has a correspondence with one of four ions – calcium, hydrogen, magnesium and hydroxyl – we also assume the quantity of each ion is equal to one for the whole group of the four amino acids  (with a probability of 0.25 for each ion per each amino acid). Thus, the overall balance of minerals will look like this: 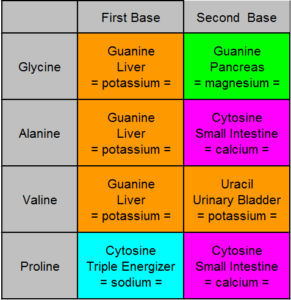 Here is the total mineral balance in descending order :

– hydroxyl – 1 and hydrogen -1,   it is a formula of neutral water – the medium where the main ions act.

Overall, such a balance profile confirms the picture of imbalances that are revealed by pulse spectral diagnostics of a case of macular degeneration. On the other hand, we see that the calcium deficiency shown by pulse diagnostics is purely functional in nature, which is obviously determined by the predominance of calcium antagonists – potassium and magnesium.

Sodium and hydrogen ions were in short supply. And, as you know, the action potential of the cell (the phase of catabolism) cannot be launched without these ions. This is because the onset of the action potential is associated with the rapid entry of sodium ions into the cell, which opens ion channels for the penetration of hydrogen, which in turn is the fuel for mitochondria that produce ATP, the body’s universal energy substrate.

Based on the above, we can conclude that the bias towards potassium and magnesium in metabolic processes not only leads to diseases like macular degeneration (in fact, any other weaker body system can be under attack), but also accelerates aging. .

Therefore, one should be skeptical of any antioxidant interventions widely promoted as a way to slow down aging.

For example, it is clear from the research results, that the increased lifespan of C.elegans is a result of moderate oxidative stress occurring in the body of nematodes (nematodes are used in biological experiments due to their simplicity – they have about one thousand cells only).

What can be done with the findings?

As any entity has its antipode, as a manifestation of the law of unity and of the struggle of opposites, as the law of Yin and Yang, we can assume the presence of amino acids that can neutralize and balance the effects of lipofuscin amino acids.

In the work mentioned above, in relation to the laws of organization of DNA codes, it is postulated and proved that the main influence on the quality of an amino acid is exerted by the middle base in the triplet. Taking into account that we have found the concentration of potassium as the main factor contributing to the formation of lipofuscin and the cause of macular degeneration, we can consider the sodium ion as a potassium compensator, which, in fact, is the very antipode and antagonist, creating together with potassium the molecular machine of the potassium-sodium pump of any living cell.

Referring to the table of correspondences between the bases of the DNA triplets and the main minerals, we have found sodium corresponding to adenine in the second base (the Lungs meridian), which encode the amino acids tyrosine, histidine, glutamine, asparagine, lysine, aspartic acid, and glutamic acid.

Among these amino acids, tyrosine, which has the combination of the first two bases as Uracil – Adenosine (Hydrogen – Sodium), is the most active in compensating for imbalances in lipofuscin amino acids. And these are just the elements that are required for the flow of the catabolic phase and the activation of calcium.

The properties of tyrosine, in fact, are known as an enhancer of catabolic reactions, since it is involved in the synthesis of thyroid hormones.

But another confirming factor for the correctness of the hypothesis that describes the physics of the Book of Changes is a study conducted at Johns Hopkins University. Scientists have found that the development of light-sensitive cells in the eye, called cones, depends on the concentration of the thyroid hormones thyroxine (T4) and triiodothyronine (T3) in the organelles themselves. (Publication in English https://www.researchgate.net/publication/328244184)

And the essence of such a discovery lies in the fact that the body must fundamentally maintain a balance between anabolism and catabolism. And there are no magic medicines and potions of health and longevity, except for the need to properly maintain such a balance.

Strictly speaking, it is the spectral analysis that is absolutely indispensable in this matter.