Macular degeneration disease is characterized by a progressive decrease in vision in the area of ​​​​the macula of the eye. The macula is the part of the retina responsible for central vision, which allows us to see colors and small details.

It is believed that for young people, the cause of degeneration and loss of vision is a genetic factor.

In biology, the phenomenon of genetic translocation is known, when, under the influence of any factor, an error in DNA repair occurs.

If we take into account the work of Dr. Alexander Samohotsky, who cured almost any disease with the help of 4 minerals – calcium, magnesium, potassium and sodium, we can assume that even in the case of genetic damage, an imbalance of minerals which will be manifested in some form.

Below there is a diagram of the balance of 4 major macronutrients in the pulse metabolic analysis system in a patient, a 26-year-old male, suffering from macular degeneration, confirmed by a genetic test: “The targeted variant c.3523-3C>G in ABCA4 gene was detected in heterozygous state in the clinical sample analyzed.”

A series of measurements by the pulse analysis system has a fairly constant deviation profile. 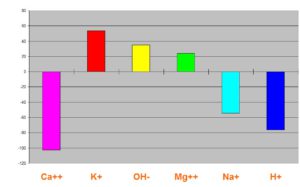 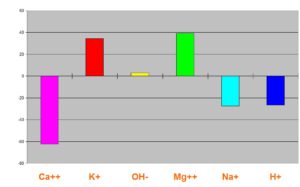 Please note that constantly repeating data in a changing environment is the main sign of the pathology of metabolic processes in the body (Heraclitus’ principle applies here – “It is not possible to step twice into the same river”). This is an indicator of the lack of synchronization with natural rhythms.

In the given case, the metabolic imbalance is obvious.

Such imbalances have very clear coordination with known medical facts:

A skew towards potassium likely is aggravated by cultural differences. The patient is an Indian citizen and follows a vegetarian diet. And, as you know, plant foods are extremely rich in potassium. Because of this natural feature, the human body is adapted to quickly remove excess potassium from the body. But it removes from it only in the presence of calcium and sodium. It is likely that most cases of kidney failure are associated with such deficiencies. Not excreted potassium leads to inflammation of the renal parenchyma and impaired functions of excretion of potassium by the kidneys. Chronic hyperkalemia has a destructive effect on all body systems, and in this case, the visual apparatus turned out to be vulnerable due to hereditary causes.

Excess potassium, as well as its deficiency, increases the risk of death from ANY CAUSE (dependence diagrams are attached from the paper https://pubmed.ncbi.nlm.nih.gov/29554312/) 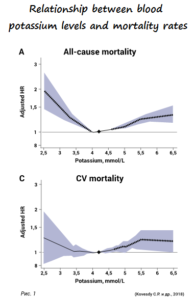 Interestingly, in such diseases, there are known contraindications to take vitamin A, which is easily explained by the antagonism of vitamin A to vitamin D and calcium.

In the light of the foregoing, the property of the new drug Emiksustat, which blocks lipofuscin deposits and the effect of toxic vitamin A metabolites on the retinal pigment epithelium, looks completely logical. Blocking vitamin A metabolites automatically improves calcium metabolism, improves the contractility of the fundus capillaries and increases blood circulation. 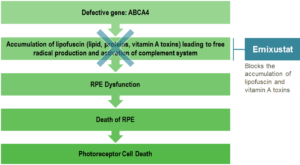 An additional study will be presented on the properties of lipofuscin and its role in this case.