Every year, about 1 million new cases of colon cancer are diagnosed in the world and about 500 thousand patients die from this disease (in accordance with data of the Swiss pharmaceutical company Roche). Colon and rectal cancer is a malignant tumor of the colon, which ranks third in prevalence and accounts for 9.6% of all cases in Russia.

We have studied the results of a pulse analysis of colon cancer for correlation with certain characteristics of chemical elements in the optical range. Please refer to the article on the relationship between sound vibrations and natural frequencies of acupuncture meridians

Balance of excesses and deficiency of vibrational energy in the meridians is represented by the “Balance of Meridians” graphs (Fig. 1).

An analysis of the correlation of trace elements and the diagnosis showed the following characteristics (blue region of the list of elements shows an excess in the decreasing order from bottom to top (Fig. 2)). 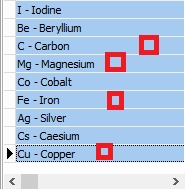 The largest excess has Copper (Cu )

Studies of Medical School of the University of Michigan was established  that cancer tissue is inhibited if the Copper excess is suppressed by tetrathiomolybdate:

It is a known fact that tetrathiomolybdate  is used in the compositions of antiangiogenic therapy:

In addition, it is necessary to take into account that we have a deficiency of trace elements and one of them is the deficiency of sulfur (please see the green list where deficient elements are sorted in order of less deficiency from the top to bottom (Fig. 3)). 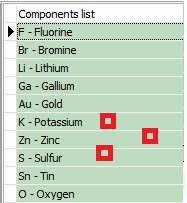 Zinc is known as a metabolic antagonist of Copper and it is also in the list of deficient elements.

Potassium, which is in the list of deficient elements, probably indicates its properties during interacting with tumors – it goes out of cancer cells into the intercellular space, acting as a suppressor of the immune system, neutralizing its activity in the fight against the tumor:

If take into account the above-mentioned role of Potassium that it is possible to argue that it is necessary to saturate the cancerous body with salt. It seems that sodium, which is a Potassium antagonist, acts as an activator of the immune system in the fight against cancer cells.

On the other hand, Chlorine, which is part of table salt, itself is another alternative anticancer agent, entering into a compound of various anti-cancer substances:

And, by the way, in recent years, new research indicates a possible positive role of sodium chloride in the fight against various kinds of tumors:

In this regard, it should be emphasized that pulse analysis considers the balance of intracellular elements, and due to the fact, it is supposed that the concentrations on the opposite side of the cell membrane should be opposite. We can assume the situation in the intercellular space is inverse to what is inside the cell. However, it is worth noting, this may not always be true in the case of total deficiency or excess of any trace element.

An interesting fact is that the list of deficient elements the Oxygen is placed, which is known as not needed for the life of a cancer cell existing on glycolysis reactions

The second significant excess (except for the probability of poisoning by Cesium and Silver, which has a fairly low probability), we have an excess of Iron. Fresh research shows that changing Iron metabolism pathways contributes to carcinogenesis:

On the other hand, the anticancer role of extracts from wormwood of some species is known, which blocks the active iron, contributing to the death of cancer cells:

Although there is no consensus on the effect of cobalt on carcinogenesis:

However-it would be wise to keep in mind the possible negative effects of Cobalt and use with precautions a diet with a high level of protein and vitamin B12.

The next excess is Magnesium.

Magnesium itself is not a carcinogen, but in an aqueous medium, a Magnesium atom is capable of producing atomic Hydrogen:

A cancer cell, as it was discovered by Nobel laureate Otto Warburg, exists only in an acidic environment:

And against the background of an excess of Iron and Magnesium the studies confirming the role of calcium in the suppression of the development of colon cancer very organically take their place:

It can be easily explained by the well-known metabolic antagonism of Calcium against Iron and Magnesium.

And finally, the last element that we will analyze here is Carbon. Carbon is an integral part of Glucose, an excess of which in the body’s fluids is considered as one of the provocateurs of the process of glycolysis in the cell (relying again on the hypothesis of Otto Warburg):

A study of the correlation of the analysis of excess and deficiency of chemical elements by means of pulse diagnostics using the PMA software indicates the general consistency of the clinical case with the methods of possible correction of the state of the body, described by numerous scientific sources. On the other hand, the obtained results of the pulse analysis indicate the correctness of the applied physical hypotheses, models, and algorithms that underlie the pulse analysis of the PMA.

We hope that our work will serve as one of the tools not only in the treatment of cancer, but mainly in its prevention before the disease shows its full power.