The latest finding on the five-day cycle structure (post) led to the realization that perhaps these periods also represent periods of the Elements.

The Chinese traditional medicine postulates that the cycle begins with Yang of Wood (Gall Bladder meridian). However, in the Doppler model of the origin of the meridians (https://pulse-academy.com/download/the-elements-of-life/), the Gall bladder together with the Liver meridian forms the Fire element.

Thus, the beginning of the cycle for us is associated with the period of the Elements of Fire, and the other elements are located in their places in the order of mutual generation:
Fire – Earth – Metal – Water – Wood.

Let’s see which meridians in the daily circulation had activity on the First and Fifth day. By the addition of sinusoids delineating the activity of the meridians, we obtain a conventionally green diagram. And it turns out to be almost the same as experimentally found as an ideal graph of the distribution of deviations of meridians from the guidance of Pulse Metabolic Analysis. In the manual, the activity of the Large Intestine and Kidney Meridian is shifted due to the Yin-Yang connection with the paired meridians of the Lungs and Urinary Bladder. 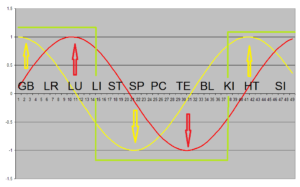 Thus, additional confirmation of the correctness of the mathematical model of pulse analysis has been found now with the help of chronocycle of traditional Chinese medicine. From the above, it follows that for a healthy organism, the synthetic phase from the summarizing of the vibrations of the Wood and Fire elements — the elements that determine the state of development and flowering of the functional abilities of the organism — is repeated daily during the period of activity. Obviously – the opposite phases of the elements in the cycle of interaction in accordance with the Wu-Xing Law – Earth, Metal and Water function in the period of rest and passivity. Violation of the difference in the pulse profile for the active and passive state of the body indicates illness (although for athletes, this may be the norm, but athletes live outside the normal functioning and must be evaluated according to other criteria, where health takes the last place).