1. To start metabolic processes, our organism uses physical vibrations of the external environment, which create the necessary electromagnetic potentials for the normal course of oxidation-reduction biochemical reactions.

2. Physical vibrations of the external environment have a certain frequency structure in the daily, lunar and annual cycles and are mainly represented by the order of frequency changes on the Earth’s surface in the Doppler cycle when the planet Earth rotates in the cosmic wind flow.

3. The structure of the natural Doppler’s rhythms stipulates the best periods for food intake, physical activity, recreation and reproduction. In case of disturbance of natural rhythms, metabolic processes, begin to experience mismatch, as result of which the body at first period becomes ill and if the rhythm disturbance is not eliminated, the organism dies.

4. Each element of the body (as well as any chemical element or particle in nature) has its own natural oscillations of a unique structure.

5. Schematically, any element of the body can be represented as an oscillatory circuit: 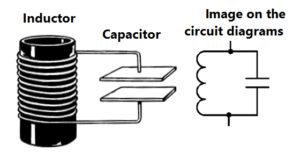 6.  Such a circuit (Fig. 1) has its own natural oscillation frequency and it is a keeper of the oscillation energy. Only in the presence of vibrating energy, an element of the organism can participate in the overall functioning of the body at the level of regular changes of potentials of oxidation-reduction reactions.

7. Any object (from elementary particles to stars in the space), including man, is a collection of vibrating elements that form pulsations of the whole object. This is a fundamental phenomenon of nature, in which there is a constant energy exchange.

8. We suppose that due to the properties of the three-dimensional space, energy transfer in this space is carried out IN accordance with the principle of the RGB-cube, which is widely used in the technique of color synthesis and where R (red), G (green), B (blue) colours are normalized vibration frequencies of the elementary cube RGB space: 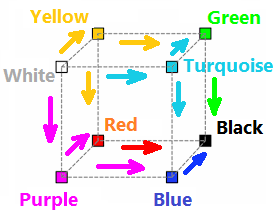 9.  The energy transfer (which can only be transmitted through vibrations). In the ideal RGB cube the energy spreads from the point of the White color (the energy source at Fig. 2). When there is an excess of energy at the White Point, the energy pulse (described by the Dirac delta function), induces in space the activation of oscillators that transmit energy, simultaneously in three mutually orthogonal directions – to the points of the Yellow, Purple and Blue colors of the elementary RGB cube. Further, Purple and Yellow form vibrations at the point of the Red color, Yellow and Blue colors form the point of Green color, Purple and Blue colors form the point of Blue color. And, finally, the points of the Blue, Green and Red colors summarize their vibrating energies at the point of Black color. Thus, to transmit energy in the 3 dimensional space, it is necessary and sufficient to have 12 types of mutually coordinated oscillators on the base of frequencies harmony. These 12 types of oscillators form edges of RGB-like cube of the space. Exactly this principle of transferring of energy in form vibrations (Qi, Chi) is supposed to be the main and fundamental peculiarity of our Universe.

10 .As a proof of the reality of the energy transportation principles in the RGB cube is the form of freezing water in the form of a snowflake. The water condenses on the plane as a projection of cube. In this case, the plane is perpendicular to the direction of energy movement (conditionally from the white to the black point): 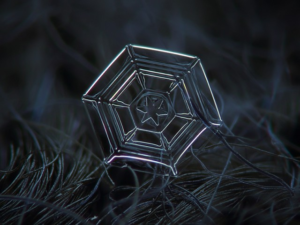 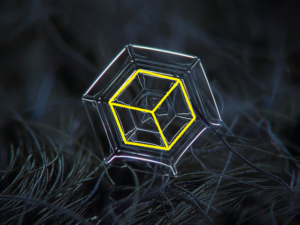 11. The second proof of the reality of the represented model of the RGB cube functionality as a scheme for the transmission of energy of oscillations is our work where we have determined the natural frequencies of the meridians as a result of phase’s consequence in the Doppler Effect when the Earth rotates in stream the cosmic wind:

12. The third proof of the reality of the represented model of the RGB cube functionality as a scheme for the transmission of energy of oscillations is our work where we have determined the natural frequencies of the meridians as a result of phase’s consequence in the Doppler Effect when the Earth rotates in stream the cosmic wind. If we move the meridians obtained by studying the Doppler Effect into the RGB-cube edges in accordance with the principles of color matching, we’ll get the following scheme: 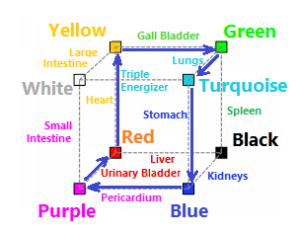 In this case, you can see the following dependencies in the scheme:

a. There is the daily cycle of activity of centrifugal meridians (the way of closed circulation of meridians consistently passes through the following points: Heart –> Gall bladder –> Lungs –> Stomach –> Pericardium –> Bladder);

c. Meridians of the same element lie at opposite edges (Yin-Yang principle) and on the one face of the RGB cube:

– The elements of the Wood – the meridians of the Heart and the Small intestine form vibrations of red color,

– The element of Fire – the meridians of the Gall bladder and the Liver form vibrations of yellow color,

– The elements of the Earth – the meridians of the Lungs and Large intestine form vibrations of green color,

– Element of Metal – the meridians of the Stomach and the Spleen form vibrations of turquoise color,

– The element of Water – the meridians of Pericardium and the Triple Energizer form vibrations of blue color,

– The elements of the Fire Minister – the meridians of the Urinary bladder and Kidneys form vibrations of a purple color.

d. Perpendicularly and through the center of the faces of the Earth and the Fire-Minister elements there is the axis. Relatively this axis other four elements are disposed exactly in the order as it is postulated by traditional Chinese Medicine: The Wood elements is placed against Metal element and Fire – against Water.

e. If we look from the side of the white pole (the source of energy – Fig. 4) and ask ourselves the question – “What is the sequence of energy motion along the centrifugal meridians?” – Such a movement will be clockwise. This is a reflection of the fundamental property of our universe, known in the physics as the “Rule of the Gimlet”: 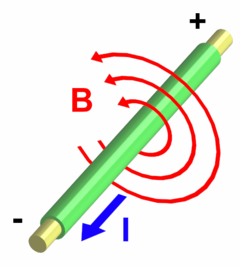 Thus, we have a complete agreement between the Doppler model of meridians activity and the energy structure of RGB cube with the postulates of traditional Chinese medicine. It is obvious proof of the adequacy of the represented model in correlation with real physical world.

13. If the natural frequencies of the 12 meridians of the RGB cube are mutually agreed, then the energy movement from the source (white pole) to the consumer (black pole) is transmitted without delay and in full volume. In Chinese philosophy in this case they say “Qi flows smoothly.” From a physical point of view when there are balanced parameters of oscillations of 12 meridians, the transient process from the white to black point has a harmonic form. That is, on the other hand – the elementary RGB cube is an oscillating dipole, rhythmically functioning at its own frequency produced by superposition of oscillations of 12 meridians.

14. The human body is a generalized form of an oscillating dipole as a holistic object. As a Sample we see by the existence of a pulse. After the death pulsations of all the constituent elements of the organism are preserved, but become unorganized, losing the synchronicity of the inter-element interaction. Only inter-element interaction predetermines the existence of a living organism.

15. In the light of the foregoing, it is possible to evaluate the work of the organism as the functioning of a virtual dipole through the analysis of its pulse, because the pulse wave, according to the model, is formed by energy beats in 12 meridians. The closer form of oscillations of energy at poles of the dipole is to the form of an ideal harmonic oscillation, the less is the energy leakage into the medium (the energy potentials must be balanced inside the system and only in this case the organism experiences neither heat, nor cold, nor low or high pressure). The duration of the decay of the dipole oscillations (and this is the lifetime) in the case of an ideal balance of the meridians oscillations depend only on circuit quality factor. In turn, circuit quality factor can be regarded as a measure of entropy – the more entropy, the worse the Q-factor, the shorter the life.

16. Thus, it is necessary and sufficient for assessing the “normal” functioning of the organism to get the information about deviations of the meridians beats relatively to the ideal balance. No other way of the health evaluation has the ability to assess the organism as a whole system. Studies of the properties of the RGB cube have shown that in the cube, depending on the combination of beats in the meridians it is possible the formation of 4 types of oscillating dipoles:

a. An ideal dipole between the white and black poles, which in the body exists at the moment of conception, forming the impulse of the energy of life: 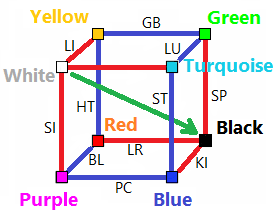 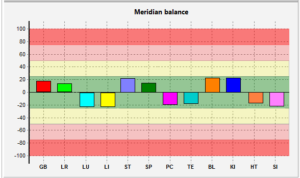 At Fig.7 there are following short names of meridians:

b. The most economical dipole between the red and blue poles – in terms of Ayurveda, the order of the functioning of such dipole is described by the properties of Kapha dosha. Kapha dosha has a special power in growing organisms. Organisms with predominance of Kapha dosha have the longest life due to the increased potential of regenerative reactions and the possibilities for tissue regeneration. We consider this type of metabolism as the most preferable; 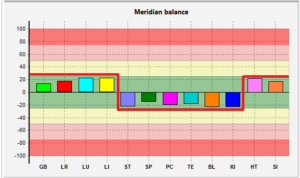 c. The dipole acting between the yellow and blue poles corresponds to the organism with the predominance of Pitta dosha. This variant of metabolism has an average life span with relative balance of oxidative and reduction potentials: 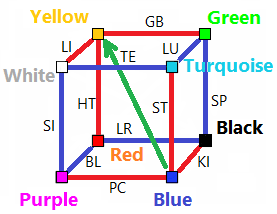 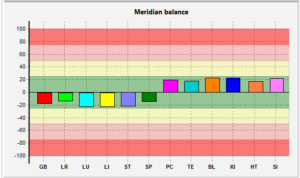 d. A dipole with a functioning between purple and green poles corresponds to the type of Vata dosha metabolism. It is an accelerated type of metabolism with a predominance of oxidation reactions. This type of metabolism has the shortest life span due to a large deficit of regenerative capacity: 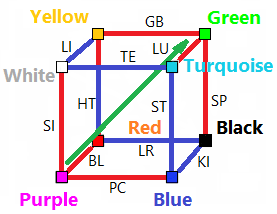 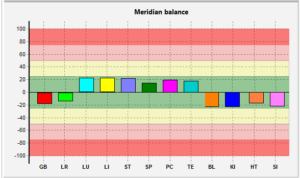 Statistical comparison of the state of organism in the coordinate system of the oscillating meridians calculated by on the base of pulse wave showed that patients with the type of the Kapha dosha pattern have the lowest possibility of health problems. Thus, we have a complete correspondence of the represented physical hypothesis with the postulates of Indian and Chinese traditional medicines and the practically obtained results.

17. The goal of cure is to bring the meridians into a balanced state. From this point of view, any effective method can be used from the arsenal of any medical and recreational practices aimed to manage the meridians. There is no standard of cure, because the process of recovery depends not only on the state of the organism, but also on the time when body is under treatment (chronobiology effect) and the state of the part of the body through which the meridians correction is carried out. Therefore, the healing process must be performed dynamically, taking into account changes in the state of the body. The discreteness of treatment actions depends on the depth of pathology. With a deep pathology, the body’s condition improves slowly and control through the pulse analysis can be performed less often. With acute, fast flowing pathology the control over the course of processes in the body should be as much frequent as it is possible.

18. The process of pulse analysis is very simple. The special oxygen saturation sensor (SPO2 probe) is sequentially worn on one of 6 fingers (the pulse is taken on the three fingers of the right and left hands in accordance with the instructions for using the program). 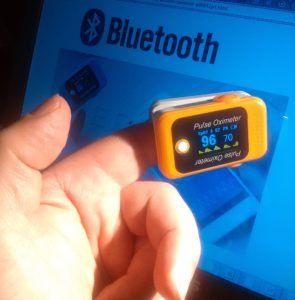 Upon termination of pulse registration the software automatically calculates the balance of meridians. Pulse data can also be exported and transmitted for professional interpretation to the company-developer, or to his specialist, who can work in the coordinate system of 12 meridians.

For more detail regarding the software and equipment please visit sections “Download” and “Buy equipment” at this site.